Mediation in Divorce – The Better Way 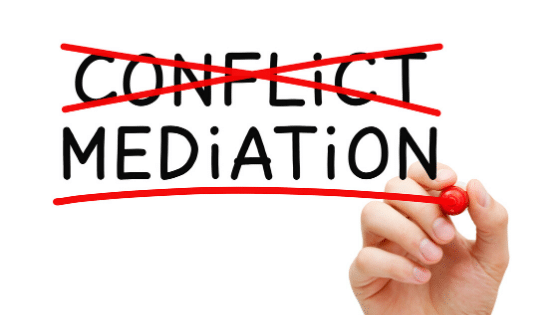 I don’t think that I can afford this much longer.

The Judge said what?!?

Many of us have heard these words from the mouths of friends or relatives going through the divorce process. Worse yet, some of us have heard these words come out of our own mouths. The bad news is that the divorce rate is up, and the impression is that so too are legal costs, delays, uncertainty, and frustration. The good news is that there is a better way.

Consider this scenario. Don and Betty are married. The marriage breaks down and they separate. They’ve got property to divide, including their house, Don’s pension, and some investments and savings plans. Like most of us, they also have some debt to divide. They have three young children, and Betty’s been at home since the youngest was born. It was a joint decision that Betty stay at home, but now Betty wants to get back into the work force and will need retraining. Don’s got a good job, but is worried about his job security.

They both want custody of the children, so child care and child support is an issue. Betty wants support for herself, and credit for the financial assistance her parents have given the couple over the years. Don wants credit for all the overtime hours he’s had to put in over the years to allow Betty to stay at home to raise the kids. Basically, they’re long on problems, and short on cash. Each of them consults a lawyer to get advice. Let’s play out the different options available to Don and Betty.

Don and Betty both tell their own lawyers their marital history as they see it. Based on the information that each lawyer receives, each lawyer’s honest and ethical opinion is that his or her client’s position is valid and justified.

Betty’s lawyer contacts Don’s lawyer and sets out her demands. These include custody of the children, support for both the children and Betty, and that Don continue to make all of the debt payments. Betty and the children will continue to live in the house until the youngest completes Grade 12.

Don’s lawyer is apoplectic! He responds by suggesting that Don live in the house with the children, as his mother has indicated that she is able to move in and care for the children. Betty will then be relatively unburdened by child care and can obtain the educational training that she requires.

Don will continue to make the debt payments, but as he will have the responsibility for the children and their costs, he will be unable to contribute to Betty’s support except for a token amount. Betty’s lawyer is likewise apoplectic!

The lawyers go back to their clients with the other’s position. Each party comes to the conclusion that the two positions are diametrically opposed and cannot be reconciled. Don and Betty find themselves the parties to a Court application.

Now the fun begins! Most matters such as these are dealt with, on an interim basis, in what’s called “Chambers”, before a Justice of the Court of Queen’s Bench. Generally, the clients do not appear in Court; their lawyers appear on their behalf making arguments based on their client’s sworn statements, or Affidavits.

Regular Chambers are held every morning at which time a Judge may hear about 20 matters. Accordingly, the entire application, including both sides’ evidence and arguments are expected to be completed in no more than 20 minutes. For longer matters, up to one hour’s time can be booked in Special Family Law Chambers, but it may take approximately two months to obtain a hearing date. Due to the added preparation usually required for Special Family Law Chambers, legal costs are often higher.

A decision made by the Judge is an interim one; that is, one which is valid until a full trial of the issues can be scheduled, where the Judge can hear all witnesses in person. More than 95 percent of all matters are settled before trial, often because the cost of going to trial is prohibitive and the outcome uncertain. Therefore, in most instances, the only hearing has been a 20 minute application in Chambers, and the divorce is then settled by negotiation.

In preparing for Chambers, each side sets out its side of the story in an Affidavit. You can well imagine what both Don and Betty spell out in their Affidavits in their efforts to set out their side of the story and be as persuasive as possible. Don and Betty both bring evidence to show why their particular plan for parenting, ability to pay or need for support, and property division makes more sense than the other’s.

Don and Betty are naturally incredulous as to the statements the other has committed to writing under oath, and each tries to discredit the other’s position. The Judge, faced with the various versions of the truth, the inability to assess each party personally, and the time constraints imposed, renders a decision to the best of his or her ability having regard to the evidence given in the Affidavits, the current law, and above all, the best interests of the children.

The results: A decision of the Court, into which neither Don nor Betty has input, which may or may not work as intended; one or perhaps neither party emerges as the winner; bills for legal services are rendered by both Don and Betty’s lawyers; and Don and Betty make comments like those set out at the beginning.

Don and Betty both tell their own lawyers their marital history as they see it. They also tell their lawyers that they would like to:

• stay out of Court if they can help it;
• keep costs as reasonable as possible;
• get out of the marriage with as little stress and emotional cost as possible;
• not get into a mud slinging match;
• keep their personal affairs as private as possible; and
• somehow be in charge of both the process and the outcome.

Based on the information that each lawyer receives, each lawyer’s honest and ethical opinion is that their client’s position is valid and justified. They also advise their clients about Mediation as an alternative that will meet all of their stated needs.

Don and Betty are told that Mediation is a process whereby both of them, with the assistance of a trained Mediator who acts as a neutral third party and facilitator, attempt to arrive at a mutually acceptable plan for the dissolution of their marriage and issues arising out of their decision to divorce. As a Mediator will not impose solutions to problems or take sides in the negotiation process, any agreement that Don and Betty reach will be of their own making. As a result, they will likely be more committed to abiding by its terms and conditions than if the Court has to impose a solution.

Because Mediation is voluntary, if either Don or Betty is dissatisfied with the Mediator or the process, they are free to discontinue the Mediation at any time. They are assured that because Mediation is considered to be an effort at settlement, all statements that are made at Mediation are on a without prejudice basis; that is, off the record. If a settlement cannot be reached, what was said at Mediation (with the important exception of statements made which may tend to show that the children are at risk or have been abused) cannot be used against them in later Court proceedings.

The lawyers assure both Don and Betty that even if they reach an agreement, it will not be binding until each of them have come back to their lawyers to obtain independent legal advice, so Don and Betty feel reassured that they won’t give the farm away. The lawyers encourage their clients to consult them at any time during the Mediation process if they have questions as to their legal rights or obligations.

Each lawyer offers candid advice as to his or her client’s best and worst possible outcome in Court, should they not be able to reach an agreement through Mediation. Knowing what is likely to happen in Court will assist Don and Betty in determining whether to continue to mediate or let the Courts decide.

Don and Betty are informed that although there is no formal licensing process for Mediators, voluntary associations such as Alberta Family Mediation Society (www.afms.ca), Family Mediation Canada (www.fmc.ca) and the ADR Institute of Alberta (www.adralberta.com) do exist. Mediators have a wide variety of education and experience and may or may not be trained as lawyers, psychologists, or social workers.

The Mediator speaks with each party separately prior to their first meeting to get some indication of the parties’ backgrounds and to screen for such things as spousal violence or abuse.

Because of the interaction between the parties and the Mediator’s training in facilitating that interaction, both parties are able to get what they need. As a result, the parties are more often able to reach detailed agreements tailored to their situations and are happier with the results than they would have been if the usual methods of either negotiation or litigation had been used.

The Mediator explains an added advantage of Mediation; that costs are typically much less than in the traditional process of either negotiated settlement through the lawyers or litigation. Don and Betty first mediate the manner of payment between them so that each can contribute to the Mediator’s costs, and thus each have a stake in the outcome. Don and Betty are invited to take turns in setting out the issues between them.

The Mediator explains the necessity for full disclosure by each, and the manner and rotation in which each issue is to be dealt. The Mediator takes control of the process and makes it clear to both of them how and when each and every one of their concerns and issues are to be addressed. The Mediator does not, however, take control over the outcome. It is up to Don and Betty to come to an agreement of their own making. The Mediator only assists in the process. Because of the number of issues to be dealt with, the entire Mediation takes about four sessions.

• both parties emerge as winners;

• the bills for legal services which are rendered by both Don and Betty’s lawyers are minimized;

• costs of the Mediator are shared; and

• Don and Betty both make comments like the following:

“If you have to go through a divorce, I highly recommend Mediation.”

“The divorce still seems to have been inevitable, but now I seem to understand where my spouse was coming from.”

“I’m satisfied with the outcome and feel I can get on with my life with a sense of self-respect and respect for the process.”

“I’m happy I didn’t blow all my money on lawyers and litigation. Divorce is hard enough financially without extra expense.”

Marla S. Miller, Q.C. is both a Registered Family Mediator and a Registered Collaborative Family Lawyer and practices in Edmonton with Miller Boileau Family Law Group